Postural Orthostatic Tachycardia Syndrome (POTS) is a poorly understood condition affecting the autonomic nervous system that results in a fast heart rate when vertical. This condition can be mild and fleeting (due to such things as deconditioning) or more long-term and potentially disabling. For those whose POTS does not resolve fairly quickly with traditional treatment (such as high salt and beta-blockers), finding the medical cause of POTS is critical. Unless the medical cause of POTS is identified and treated, patients can not only remain ill, but they can develop a worsening of symptoms that extends far beyond dizziness, a fast heart rate, and “orthostatic intolerance”. These people are often sick in any position, hinting that their condition involves more than just the symptoms of POTS. If you’ve experienced these symptoms, you may have Inflammatory POTS.

POTS is not a disease process itself but can be considered a symptom of numerous underlying disorders. These disorders include cardiac dysfunction, neurological problems, metastatic disorders, to name a few. One commonly underlooked cause of POTS is abnormal (and generally chronic) inflammation. Chronic inflammation is sometimes “autoinflammatory” — meaning it is coming from the patient’s body (not an external source). Subtle autoinflammatory conditions in some cases of Inflammatory POTS can be difficult to diagnose.

At POTS Care, we have coined the term “Inflammatory POTS” to describe this disorder.

Undiagnosed Inflammatory POTS can present in many different ways, and it can be difficult to locate the source of the inflammation, but this is a necessary step to properly treat these patients. Treatment based on addressing symptoms only can actually worsen the underlying issues, locking the patient into a chronic illness. Most autoinflammatory conditions require the measurement of inflammatory cytokines for diagnosis, which is beyond the scope of most practitioners.

Inflammation is fairly easy to identify when it is acute. If you sprain your ankle, for example, it swells, becomes painful, and looks red. You can’t miss it! If inflammation is chronic, however, it can result in similar symptomatology (some pain, puffiness or swelling, and even redness or flushing), but the symptoms are systemic (throughout the body) and may be more subtle. But because they are chronic, further damage can occur secondary to the inflammation, leading to more symptoms and can even result in organ dysfunction, vascular damage, and abnormal scarring (or fibrosis).

Inflammation such as this can involve most any inflammatory cell — including but not limited to macrophages, mast cells, basophils, eosinophils, lymphocytes, and neutrophils. It can be easy to misdiagnose this inflammation if looking only at symptoms. Blood tests can be extraordinarily helpful, and sometimes biopsies (endoscopies and colonoscopies) are needed.

One form of systemic inflammation that can result in POTS is Mast Cell Activation Syndrome (MCAS). Patients with MCAS can suffer from itching, flushing, hives, difficulty breathing, gut pain and digestive issues, burst of anxiety, tachycardia, and can experience difficulty with temperature control (often alternating between feeling very hot, with tachycardia and flushing, to becoming acutely cold, often shivering with the inability to raise their body temperature). Antihistamines can be helpful, but a positive response to antihistamines does not mean the patient must have MCAS.

A patient may have every symptom of Mast Cell Activation Syndrome (MCAS), for example, but if the diagnosis is made only on symptomatic presentation (and in the face of negative bloodwork) additional forms of inflammation may be of primary concern.  If treated as MCAS when testing for MCAS is negative, the patient can improve but will often be left to suffer. Even worse, the patient may assume that everything has been done to help them and they must learn to accept their condition. This misdiagnosis can lead to unnecessary suffering, but digging deeper into the source of the inflammation and treating can often improve the patient’s condition.

At POTS Care, we see many patients misdiagnosed as having MCAS because they present with the symptoms of MCAS, yet no one has explored their case deeply to locate inflammation that can mimic MCAS.

“If MCAS (mast cell activation syndrome) is secondary to an underlying inflammatory process, treating mast cells will help the patients feel better, but will not “cure” the patient. If the patient is left to treat mast cells (a secondary response) without treating the primary problem causing MCAS, they will never be free from the presentation.”
– Diana Driscoll, OD

Eosinophils are typically considered to be “allergy cells”. They become activated in allergic exposure and release numerous chemicals into the body, including histamine. Eosinophils are activated in “atopy” which is characterized by a tendency to be “hyperallergic”. Often, patients present with eczema (atopic dermatitis), allergic asthma, and allergic rhinitis (hay fever) and often all three of these!

Eosinophilic problems are especially predominant in the gut and throat (eosinophilic esophagitis and eosinophilic gastroenteritis) yet can be missed with biopsies. Importantly, this inflammatory condition can mimic Mast Cell Activation Syndrome (MCAS) and we must evaluate patients carefully to diagnose this (and other MCAS mimickers correctly).

The adrenal glands, located at the tops of the kidneys, receive signals from the pituitary gland in the brain. The adrenal glands help the body control inflammation by releasing cortisol. When exposed to injury or stress (physical or mental), the production of cortisol helps to reduce the inflammation and allow recovery. When the pituitary gland or adrenal glands are not working properly for any reason, the production of cortisol is often insufficient to help control inflammation. The patient can have a very poor stress response, and levels of cortisol can become so low that nausea, weakness, and the inability to stay awake can occur. Yet when treated, patients can rather immediately improve.

Addison’s disease can be both primary (due to adrenal disease) and secondary (due to something affecting the adrenal gland). These conditions present somewhat differently, and symptoms can wax and wane — often making diagnosis elusive.

Congenital Adrenal Hyperplasia (CAH) may be “Classic” or (much more commonly) “Nonclassic”. Nonclassic CAH is not uncommon, with some research indicating an incidence as high as one in one hundred people. Yet patients can present as basically normal and functional until hit with high levels of stress or injury. Blood work is usually able to identify this condition but may involve stimulation tests (usually performed and interpreted by endocrinologists). There are many possible genes involved in CAH, but one overlap we are certain to rule out involves hypermobility (or “EDS — Ehlers-Danlos syndrome) and CAH. This genetic combination involves Tenascin X (part of connective tissue) and a CYP21A2 gene (controlling 21-hydroxylase which can cause CAH). If also involving a complement protein (C4) the triad is often referred to as “RCCX”.

We see congenital adrenal hyperplasia in less than 10% of patients at POTS Care, but we see just as many people with genetic overlap conditions that mimic RCCX or CAH and are careful to evaluate everyone as an individual.

At POTS Care, we have found that autoimmunity, although not uncommon in POTS patients, is generally a secondary issue. Identification of the autoimmune condition opens up additional treatment options, but search for the underlying conditions must not stop there. Some autoimmune conditions (such as Sjogren’s Syndrome, for example) can cause POTS or POTS-like episodes. We never assume that the autoimmune condition is the only reason for the symptoms, however. Digging deeper, we can often find undiagnosed contributors that when treated, can allow dramatic patient improvements.

Endometriosis is associated with an inflammatory response that can contribute to both POTS (autoinflammation) and chronic pain.

The chemicals that these cells release can help us fight infection and begin injury repair but when chronic, these chemicals can then damage healthy tissue. This damage (often accompanied by pain) can present similarly to autoimmune conditions — but with different genetics at play — and different treatment options for the patient.

At POTS Care, we are devoted to locating and identifying these genetic inflammatory conditions whenever possible.

“This paradigm shift is tremendous news for those who believe their condition is due to genetic defects, and little can be done beyond symptomatic relief. This new research indicating that the majority of patients can be treated with existing medications to address the “true” underlying condition is ground-breaking.”
– Diana Driscoll, OD

“I understand that we are pushing the envelope with the term “Inflammatory POTS”. But because research and publications are notoriously slow to emerge, as patients, we just can’t wait for consensus on this topic. People need help now, as my kids and I did. We are here to help you today!” “The misdiagnosis of MCAS has me fascinated! I was certain of it for so many reasons, BUT I was able to switch gears and totally get on the same page as Dr. Driscoll and not only is she correct, but I am already recovering!“ 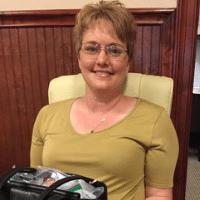 “The visit is worth every penny. The doctors and staff are great, helpful, and understanding. It’s amazing the information they can get from scans that were missed by prior doctors. Thank you to the POTS Care team.” “I think anyone with POTS should come here because they are really focused on how to heal you instead of just covering it up. They look into what is causing your symptoms and give you a plan where you can get better.” 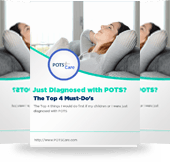 Get Your Life Back

POTS Care is the only clinic dedicated to locating and treating the underlying medical causes of POTS, not just the symptoms. Call us today to speak with one of our Patient Care Coordinators!